Acting on behalf of the owner of a substantial warehouse building in Milton Keynes, Louch Shacklock and Partners have successfully completed an appeal against the rating assessment in the 2010 Rating List. A 30% reduction in Rateable Value was negotiated which will produce a saving in terms of rates payable over the life of the 2010 Rating List of over £670,000.

David Louch, who was responsible for the appeal commend that rating appeals of this nature are highly technical requiring expert knowledge of rating law and valuation, together with detailed knowledge of the local property market in which the premises are situated.

Background to Business Rates in England

Business Rates is the commonly used name of non-domestic rates, a tax on the occupation of non-domestic property. Rates are a property tax with ancient roots that was formerly used to fund local services that was formalised with the Poor Laws of 1572 and 1601. The Local Government Finance Act 1988 introduced business rates in England and Wales from 1990, repealing its immediate predecessor, the General Rate Act 1967. The act also introduced business rates in Scotland, but as an amendment to the existing system which had evolved separately to that in the rest of Great Britain. Since the establishment in 1997 of the Welsh Assembly Government able to pass secondary legislation, the English and Welsh systems have diverged.

The Local Government Finance Act 1988 (as amended) provided an administrative framework for assessing and billing, but did not redefine the legal unit of property, the hereditament, that had been developed through rating case law. Properties are assessed in a Rating List with a Rateable Value, a valuation of their annual rental value on a fixed valuation date using assumptions defined by statute. Rating lists are created and maintained by the Valuation Office Agency, a UK Government Executive Agency. Rating lists can be altered either to reflect changes in properties, or as valuations are appealed against. Since 1990 new rating lists are normally created every five years, however, the 2015 revaluation has been postponed until 2017. Revaluation does not raise extra money for Government but is a means by which changes in property values geographically and between use sectors are fairly reflected in individual ratepayers’ liabilities.

Billing and collection is the responsibility of the local authorities who are funded by the tax, but rather than receipts being retained directly, they are pooled centrally and then are redistributed. The rateable value is multiplied by a centrally set fraction (the Universal Business Rate or UBR) to produce the annual bill which is indexed to retail prices. There are a number of reliefs are available, such as those for charities, agricultural properties and small businesses.

Rateable Value is an estimate of the annual rent that would be paid for the property at a fixed date two years prior to the beginning of the list, known as the Antecedent Valuation Date (”AVD”), incorporating certain assumptions laid down in the legislation. Economic conditions are considered at the Antecedent Valuation Date, and physical properties are considered on the Material Day (the day on which matters affecting the physical state of the property are taken into account – e.g. when an extension to a property is completed). The valuation assumes that a year to year (that is, ongoing) lease is being agreed, where the tenant pays all repairs and insurance, and that the property “is in a state of reasonable repair”.

The current 2010 Rating List came into force on 1 April 2010 with an Antecedent Valuation Date of April 2008. A successful appeal on an assessment in the 2010 List, if based on valuation/economic grounds, will be backdated to the commencement of the valuation list.

Whilst the 2010 revaluation will not increase the amount of rates collected nationally, within this overall picture, over a million properties will saw their business rate liabilities reduced and some ratepayers experienced significant increases.

For those that would otherwise see significant increases in their rates liability, the Government has put in place a transitional relief scheme to limit and phase in changes in rate bills as a result of the 2010 revaluation.  To pay for the limits on increases in bills, there also limits to the reductions in bills.  Under the transition scheme, limits continue to apply to yearly real (after inflation) increases and decreases until the full amount is due (Rateable Value times the UBR).  The scheme applies only to the bills based on a property at the time of the revaluation.  If there are any changes to the property after 1 April 2010, transitional arrangements will not normally apply to the part of a bill that relates to any increase in Rateable Value due to those changes.  Changes to billed liabilities as a result of other reasons (such as because of changes to the amount of small business rate relief) are not covered by the transitional arrangements.

Calculating transitional adjustment is quite complicated but the basic limits to any real increase or decrease is shown in the tables below. A small property is a property with a 2010 Rateable Value below £18,000 (£25,500 within Greater London). All other properties are large properties. 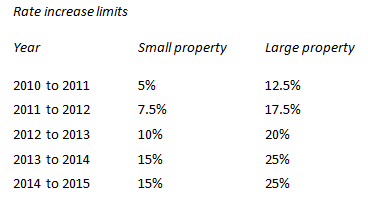 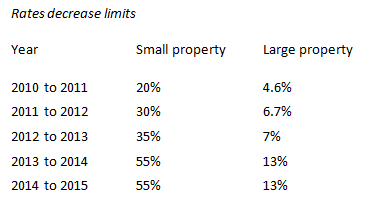 The application of transition may have the effect of negating, or delaying the benefit of a successful Rateable Value appeal.

The Bases on which Valuations are Undertaken

The 2010 List is the fifth modern revaluation and the Valuation Office Agency (“VO”) has streamlined its computer programmes to enable bulk valuations and appeals to be administered. Similar properties (generally defined in terms of location, use age and size) have been aggregated into ‘Valuation Schemes’ with co-ordinated approaches to valuation.

All occupiers of commercial properties are legally obliged to complete a Rent Return notice which is issued by the VO. These returns require disclosure of the commercial terms and rent payable for any leased property. The VO’s analysis of this data enables basic prices to be calculated for each Valuation Scheme with a menu of adjustments for such factors as eaves height, sprinklers, return frontages (for retail property), air conditioning (for offices) etc. Accommodation within a single building (or hereditament) having differing characteristics is often valued as a percentage of the basic price or the main price rate to produce an aggregate ‘in terms of main space’ (ITMS), e.g. for an industrial building the office accommodation would be assessed at, say, 125% of the basic industrial price.

The VO has a rolling process for the inspection and referencing of all commercial property to determine physical factors such as areas, eaves heights and specifications. Properties are commonly reinspected when subject to an appeal or if there have been alterations. The areas and physical characteristics of many properties are often not subject to challenge on appeal having been agreed (as a matter of fact) following appeals made in earlier valuation lists.

The application of the valuation scale, adjustments, ITMS relativities and property reference data is computerised by the VO to produce the majority of the Rateable Values in the list for so called bulk properties, although specialist hereditaments, e.g. power stations, harbours and some hotels, are assessed individually.

All ratepayers (and their agents) are entitled to challenge their 2010 Rating List assessments on one or more of certain specified grounds, most commonly that the Rateable Value specified as at 1 April 2010 is inaccurate, but are required to state the basis upon which the appeal (or ‘proposal’) has been made. The VO has a duty to maintain an accurate valuation list and will register bone-fide appeals.  The VO has refused to register some appeals, notably in cases where the rent payable for the hereditament is significantly in excess of the Rateable Value.

The VO has strict procedures for dealing with appeals according to is system of programming whereby appellants are in effect given a set period in which negotiations may be undertaken (otherwise known as the ‘target date’). Programmes often comprise groups of the same type of cases. It is often difficult to accelerate consideration of individual appeals outside this process, save in the case of manifest hardship, and the time period for completing an appeal will be over months, if not years.

The vast majority of appeals are settled by negotiation with the VO on the simple process of completing an Agreement Form. Many appellants simply withdraw their proposals at this stage.

In the event that it is not possible to reach an agreement with the VO, the case is referred to the Valuation Tribunal (“VT”) which is an independent appeals tribunal, funded by Parliament to handle council tax and rating appeals in England. It provides a free service with local hearings and the members who hear appeals are volunteers. It has no power to make awards on costs. All appeals which have been placed in a programme by the VO will normally be listed by the VT for a hearing after the target date has been reached. It is the intention of the VT, wherever possible, to arrange for the first hearing of an appeal within 12 weeks of the programmed target date. Appellants are required to deliver to the VT a Statement of Case not later than 6 weeks prior to the hearing date as otherwise the appeal is struck-off. There is a limited basis for hearing dates to be postponed.

An appellant and the VO may within four weeks of the publication of the VT’s decision appeal further to the The Upper Tribunal, Lands Tribunal (“LT”). Appeals to the LT are relatively rare and generally involve disputes on technical issue rather than valuation per-se.