Business Rate Reform: Be Careful What You Wish For

In his autumn statement, George Osborne announced that business rate rises will be limited to 2% in England and Wales next year instead of being linked to inflation (3.2%) and that all retailers on the High Street (including pubs, cafes and restaurants) with a rateable bill of up to £50,000 in England will receive a discount on business rates worth £1,000 off their bills in 2014-15 and 2015-2016. He will also extend a scheme that offers rate relief to small businesses which will mean more than £300m of revenue is lost in the 2014/15 year.

Included in the Chancellor’s package of measures is an inventive scheme for temporary “reoccupation relief”, which will grant a 50% rates discount for new occupants of previously empty retail premises, for a period of 18 months. The initiative, which is intended “to help reduce the number of boarded-up shops on English high streets”, will be granted to businesses moving into long-term empty retail properties on or after 1 April 2014 and on or before 31 March 2016.

In the meantime the politicians are fighting for the high ground of the short term fix. In Scotland, First Minister Alex Salmond is understood to be considering a cut in business rates and Chuka Umunna, the shadow business secretary has promised to freeze business rates in 2015 and 2016.

These are small but welcome gestures to the growing chorus of business rate payers calling for more radical reform of the non-domestic rating system including the British Retail Consortium (‘BRC’), the CBI, the Federation of Small Businesses, the British Chambers of Commerce, the British Council of Shopping Centres and even Kirstie Allsopp. The storm of protest is reflected in media coverage typified by The Daily Telegraph’s “Fix the Rates” campaign.

The grounds of complaint are twofold – that the business rate tax take has grown out of proportion to other means of taxation; and secondly, the rating system itself is fundamentally unfair, outdated and outmoded.

So, what are the facts?

The Extent of the Business Rate Tax.

First the annual indexation of business rate payments to Retail Price Index will generate £26.7bn in this financial year, taking it ahead of fuel duties for the first time, according to official forecasts from the Office of Budget Responsibility. The income from the tax will then increase another 11pc to £29.6bn by 2015 to 2016, when it will also be larger than council tax and become the Treasury’s fifth biggest source of income behind only income tax, National Insurance, VAT, and corporation tax. 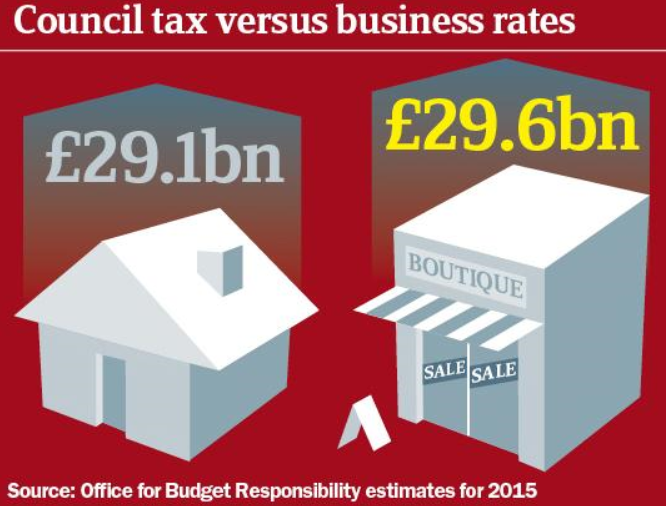 Ratepayer lobbyists say that these statistics do not support the Government’s pro-business mantra and send a confusing message about its devotion to improving the business environment – particularly when council tax bills have been frozen for years. They accuse the Government of allowing business rates to become “an anti-business tax” and an impediment to investment.

The essential issue here is that business rates are a fixed levy, albeit geared to RPI, and not a variable tax on income or sales. The harsh truth is that if Government is to adhere to its deficit reduction strategy amelioration of business rate liabilities can only be achieved if the proportionate contribution of other taxes increases. As always, there will be winners and losers.

Alternatively, but more controversially, the range of property for which business rates are payable could be extended, or the extent of relief granted to some ratepayers could be reduced, so that the rate in the £ (Uniform Business Rate) is lower for all ratepayers.

The main types of property that are currently exempt from business rates are agricultural land and buildings, including fish farms, and buildings registered for public religious worship. Widening the tax base for business rates to include these user classes will not be popular, or even politically acceptable, but if there is to be a root and branch review of the rating system the established tenets of the system have to be challenged.

Perhaps the levy of rates on undeveloped land with planning consent would be more palatable? After all, rates are payable on empty commercial buildings, so why not unused development land?

Relief from part or all business rate liability is granted on the following bases:

Enterprise Zones (up to a maximum of £275,000)
Rural rate relief (for small properties in a rural area with a population below 3,000)
Charitable rate relief (charities and amateur community sports clubs can apply for relief of up to 80% if a property is used for charitable purposes)
Small business rate relief (upto 100% for occupiers having a Rateable Value below £18,000 (£25,500 in Greater London)
Empty properties (for 3 months, 6 months for industrial properties and indefinitely for listed buildings, buildings with a Rateable Value under £2,600, properties owned by charities (only if the property’s next use will be mostly for charitable purposes).

Restricting relief from these recipients is guaranteed to generate equal if not greater protest and a relatively small uplift in the overall tax take. I suggest that the main areas for review would be the circumstances in which charitable relief is granted and restrictions in ratepayers ability to mitigate empty (or void) rates by sham temporary occupations designed to justify additional relief periods.

The Fairness of the Rating System

The charge is that the business rates system is uncompetitive, perverse and in dire need of reform.

Based on a system first introduced by the Poor Laws of 1572 and 1601, it is a tax on property value virtually disregarding ability to pay. Despite more recent legislation (Local Government Finance Act 1988) the basis of valuation continues to be based in case law and many question the legitimacy of what is seen to be a less than transparent valuation and assessment basis.

The process of revaluation (undertaken quinquennially since 1990) is designed to reflect differential shifts in value over time. Each revaluation is based on market rental values two years prior to the implementation of each new Rating List, so current Rateable Values in the 2010 Rating List reflect market values pertaining in 2008. In October last year the Government announced that the revaluation planned for 2015 was to be postponed until 2017, ostensibly as a cost saving measure although some more cynical commentators thought this is was a device to avoid the inevitable ‘winners and losers’ debate immediately prior to the general election.

The valuation problem with the 2008 antecedent valuation date is that the effects of the recession were not then evident; indeed the tone of values reflected boom conditions. Whilst property values some areas of the country (notably in London) have more than recovered, others remain depressed.

It is not uncommon for Rateable Values in some secondary high streets to be twice the current market rent, so the rate liability for some occupiers (and owners of empty property) is truly unfair. It all adds up to a massive subsidy from economically disadvantaged regions to successful ones, from poorer districts to well off neighbourhoods and from struggling industry to profitable businesses. The combination of the effects of recession and the postponement of the 2015 revaluation has had perverse effects which can only be addressed by ensuring that revaluation is carried out as soon as reasonably practical and that revaluations in the future are not delayed beyond a five year interval.

Unfortunately revaluation has not previously been an entirely effective in reflecting differential changes in value, as successive governments have implemented a programme called transition. The basic premise is that ratepayers who benefit from a reduction in liability following revaluation should have the saving phased in over a number of years. Conversely ratepayers having an increased liability have the benefit of the real term increase spread again over a number of years. For the 2010 Rating List the transition system was revenue neutral, so the gainers paid for the losers. This system perpetuates both the inequality that the revaluation was supposed to address and the subsidy from those who need reductions in liability to those that do not. It is essential in my view that any system of transition in the 2017 Rating List is restricted to two years.

What are the Alternatives?

It has been rather easier to complain about the current business rates system than to propose alternatives which would be fairer, more transparent and cost effective. Much of the debate has been limited to academic circles and the impact of alternative bases of taxation is not fully understood, so the temptation has been to suggest extensions of relief to the existing system or to implement the short term fix of restricting the amount of annual increases.

A fundamental question is whether or not business rates (or any alternative) should be under local control so that the tax raised bears greater relevance to the provision of local services. In 1990 the UBR was introduced by Margaret Thatcher (at the same rate for all business in England, with the money going direct to the Treasury) to stop Left-wing Labour councils using the old business rates to finance their higher spending. Local control plays well with the Government’s localism agenda, an element of which is already in the Business Rate Retention Scheme (which for a limited time allows local authorities to retain 50% of the rate income generated on new property developments).

Options for wholesale replacement of the business rate system are limited perhaps only to a local sales tax in the US model, although implementation in the UK would be complex with some unknown consequences.

The Liberal Democrat party has long been an advocate of locally based site value rating (SVR), although the idea did not feature in its 2010 manifesto. Essentially it is another form of rates, but based on land value not building value. Anyone who knows anything about property valuation will be aware of the technical difficulties of assessing site values, so practically speaking I think this is a non-starter.

There is greater scope for intra-sectoral reform, such as an online shopping tax to support bricks-and-mortar retailers, or an additional charge to out of town retailers to balance the disadvantages of town centre locations. Perhaps manufacturing occupiers would benefit from a lower rate of charge at the expense of warehousing operators?

Revision to the existing rating system will create differing groups of winners and losers, and the degree of any saving or additional cost may be considerable. The case for change has yet to be made and the evidence base established. In my view we are likely to see in the medium term some form of blended multi-based system established with an element of local control but with the majority of revenue raised centrally but based on the current business rates system.

Rateable Values are fixed by the Valuation Office, an executive agency of HMRC, and rates are charged by local authorities who receive grant support from central government allocated from the aggregate pool of rates collected nationally. The system has been established over decades and there is a well understood basis on which ratepayers can appeal against individual assessments.  There would seemingly have to be a good case to justify the costs of moving away from the status quo.

In the ongoing debate, be careful what you wish for, there may be a sting in the tail.